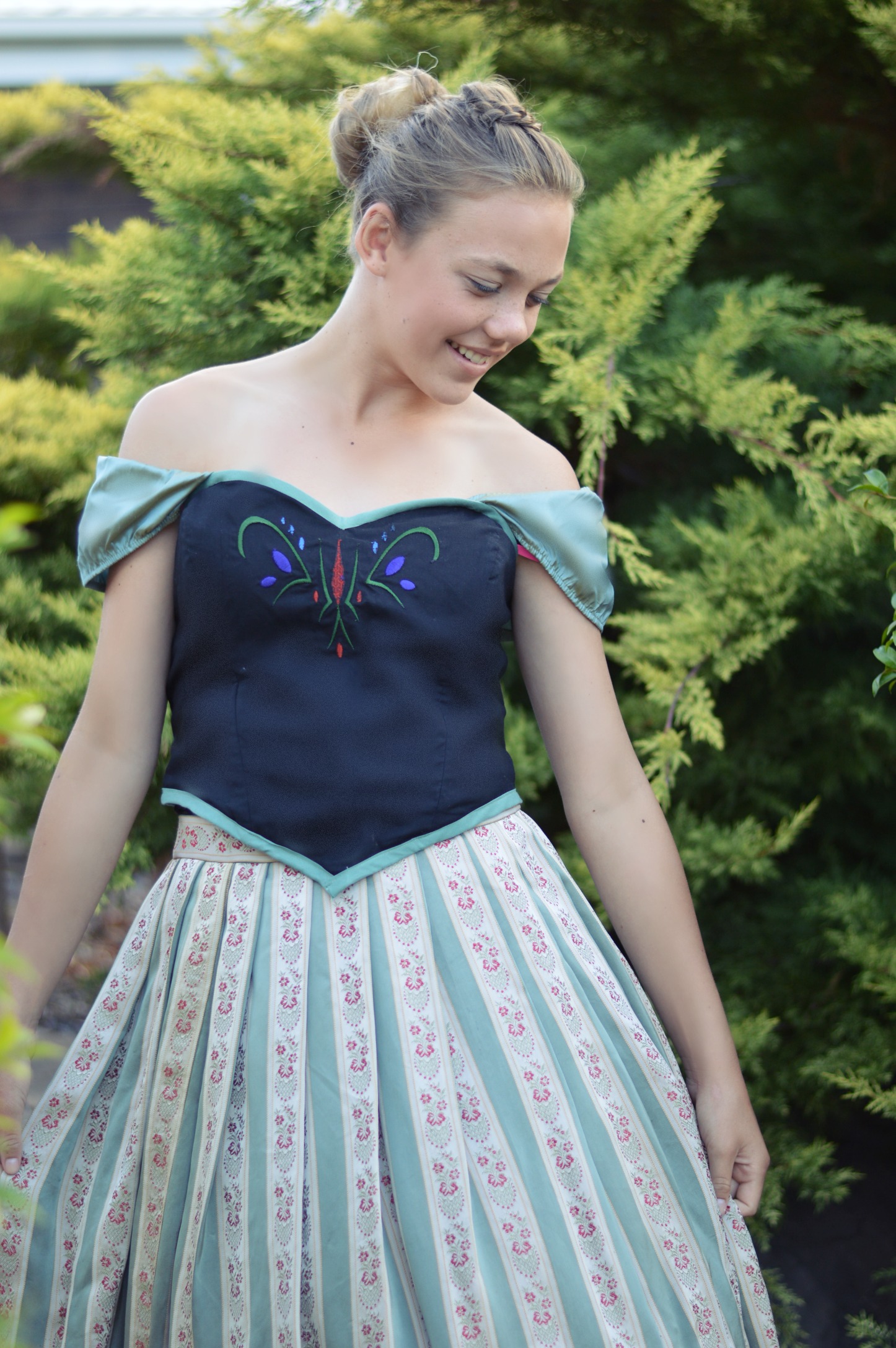 So this is my gorgeous niece, well step niece (is there such a thing?) if we are going to be pedantic.  She models for me at least a couple of times a month and you are likely to see her on a regular basis on this site.

When I first started making the Elsa dresses she was putting on the ‘I’m too old to dress up as a princess’ act (seriously no-one is ever too old). However, as soon as  an opportunity arose to dress up as Anna, she was only too keen to volunteer.  I had made this outfit for a friend to hire to dress up as Anna at her little girl’s Frozen party. I happened to have the costume in the car when I payed a visit one day. Kyla wasn’t in the best of moods, so we did a quick hair makeover, put on the costume and instant smiles.

The bustier is made from sturdy cotton (although I wish now I had done it in a velvet) with boning to give shape. I used the trusty Brother Innovis to embroider the pattern on the front. The skirt was a prized find in a op shop. An old pair of curtains that were hiding behind some old duvet covers – I nearly squealed when I saw them – I knew they would make the ‘perfect’ Anna skirt.  – Yes you can call me Maria haha I was humming ‘a few of my favourite things’ whilst I was sewing 😉 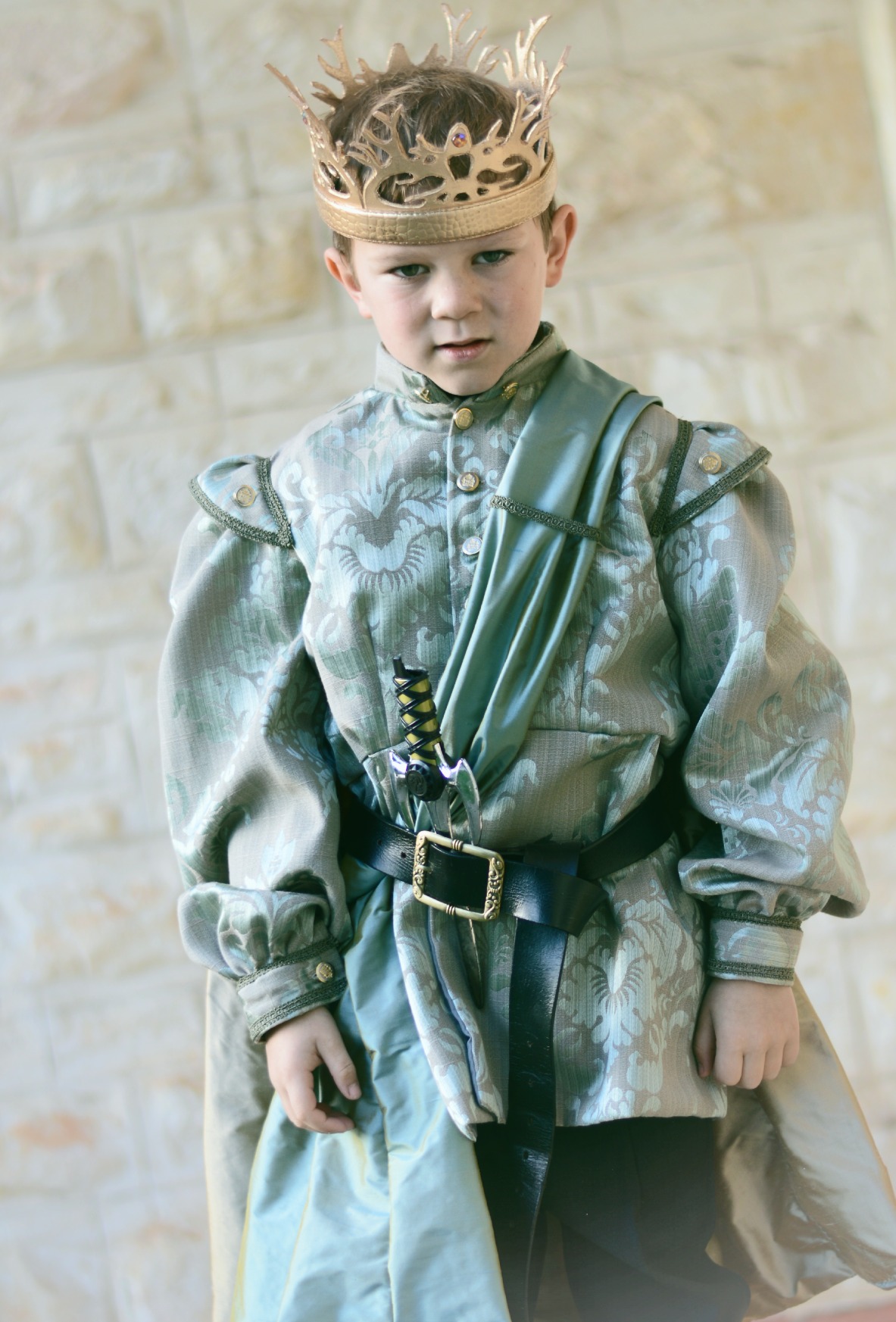 Earlier in the week I read a story about a boy in England who turned up to his book week parade dressed at Christian Grey (complete with a handful of cable ties bahaha, 10 points to that mother if you ask me). Apparently the school was so horrified that they sent him home in disgrace, ‘apparently’ his costume reflected badly on ‘the school’s high standards of student behaviour, welfare and safeguarding’. Well I just wonder what they would have made of my King Joffrey (cross bow wielding, prostitute/baby murdering, tyranical, most hated TV character of all time) costume.  Makes tying up a woman and making her say ‘yes Sir’ a little tame doesn’t it.

In saying that we put the picture up on Reddit (I wanted to show off my awesome costume as much as possible) and were absolutely crucified for it.  Mind you – not for the personality that he was portraying but the fact that he was holding a plastic dagger in the photograph. We had over a million views and had a mixed bag of responses from ‘WOW AWESOME’ through to ‘how could the school let him take a weapon in’? (answer: because we live in Australia and children are more likey to be hurt from a dive bombing magpie than a plastic Power Rangers dagger – common sense people).

Well I can tell you that King Joffrey was well received at last years book week parade, ok so I don’t think many parents/teachers knew who he was – and let’s be honest he had no idea who he was portraying(he is 6 of course I don’t let him watch the show). Yes, the point is to be a book character that they know but he just thought he was ‘random prince from random fairytale’. He certainly enjoyed the fuss and applause that he received for the costume.    I’m so glad I made it, he looked fantastic – he actually has similar features to Jack Gleeson (the actor who plays Joffrey)  and that just added to the effect.  It really gave my sewing skills a work out and the hubby did magnificantly carving the leather crown.

Oh and there was one more really, really, REALLY cool thing that happened 😉

Now how to top it for this year………